Not long ago, on one of those cold, dark, wintery, gloomy, wet evenings right around dusk, I stepped outside on the porch and spotted a robin.  It startled me, because I had always thought they flew south for the winter.  But there she was, all alone and in the bare tree with her nest.  I was wondering if she’d gotten left behind, or if she’d waited too late and wasn’t able to fly south.

Then I wondered if maybe she was one of those birds that just looked like a robin, and was actually a bird that stayed in these parts through the winter.  But she was alone — there were no other birds anywhere around.

City Boy had been telling me for days before my bird sighting that he was sure a bird was nesting in our artificial plant basket that was hanging on the porch.  He said, “That thing flies out of there every time I open the front door and it always startles me!”

“Hmmm, right.  I’ve never seen it and I go out there all the time.”

“It’s there.  Right in your fake plant.  If you go look now, it will be there.”  He was starting to get indignant about me acting like I thought he was hallucinating.

“Ok, I’ll go look.”  So, out the door I went.  Nothing.  I reached up and shook the basket.  Still nothing.  Finally I flipped it all the way over, then looked back at Frank.

“Well, that bird is just gone when you’re out here,” he insisted.  “Just wait — she’ll catch YOU off-guard one of these times and you’ll see.”

So, a few days later, the lone bird I discovered in our front Bradford Pear tree began to make me wonder if City Boy was actually spot-on about the bird in the basket.  After all, the poor bird was probably only looking for a place to get warm. 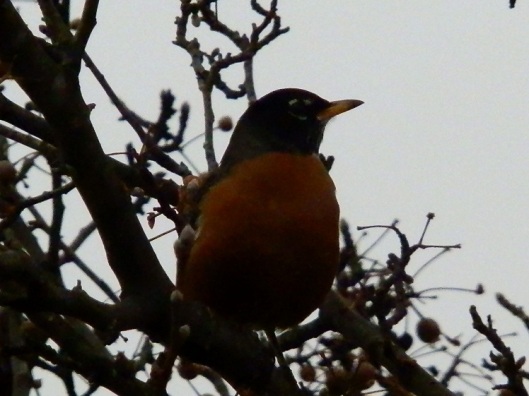 When I no longer saw any sign of the robin in the tree and Frank had stopped being knocked over by the bird in the basket, I went out and took the basket down.  Sure enough, when I pulled the greenery out, it was really apparent that a bird had been staying there.

Poor thing, I thought.  I wish I knew her story.

Here’s hoping she survived and found another bird, or else found a way to migrate to warmer climates safely. 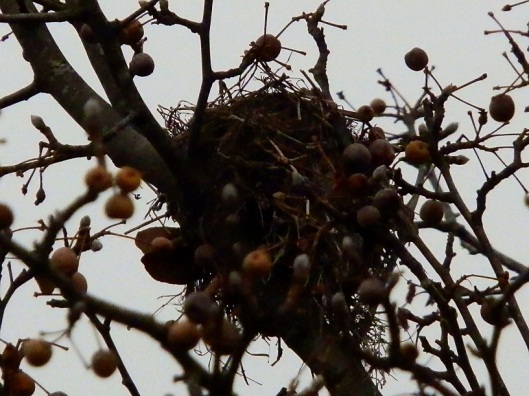