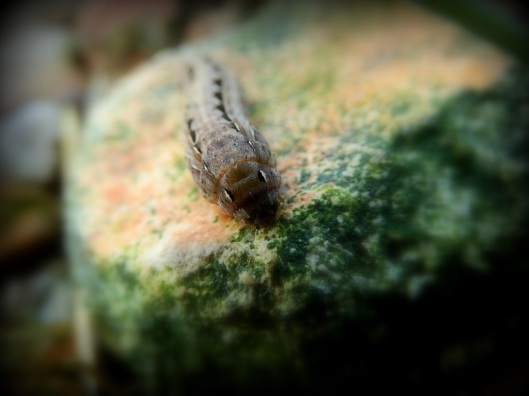 Today was a good day to wander around taking pictures, and the insect population was teeming, so I took advantage.

This little critter crawled right up to me on a rock at my feet where I was sitting.

We used to call these “stink bugs,” I think, but I had no idea he was in the picture until I processed it. 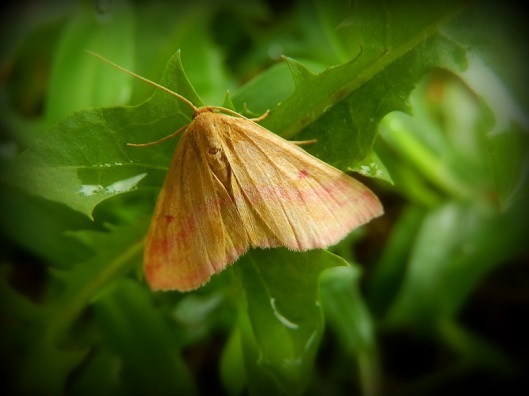 Reminds me of what it looked like when our kids would slosh red kool-aid on our light colored carpet. 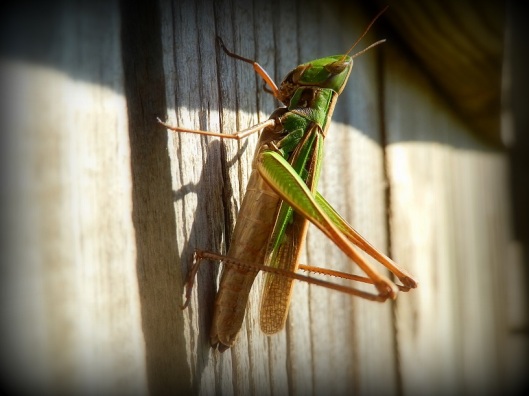 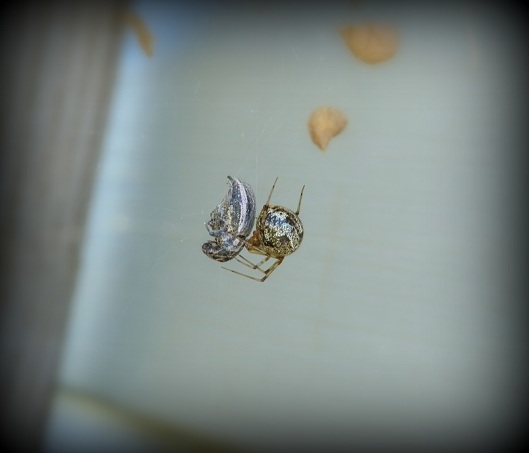 I think this poor little sow bug (we used to call them “roly-polies”) was about dead — he was barely moving.

During all this bug photographing, Lucy just HAD to be let in the house, so I let her in.  When I finally finished taking pictures, I went inside also.  The weather was so wonderful it was hard to go in!

Walking through the living room I noticed a dead leaf on the carpet from one of the plants on the mantle, so I snatched it up to throw it away.  Just as quickly, I yelled and gave the cold, slimy thing a toss in the air, and it landed on the front of the fireplace.  It was definitely not a leaf, nor was it dead. 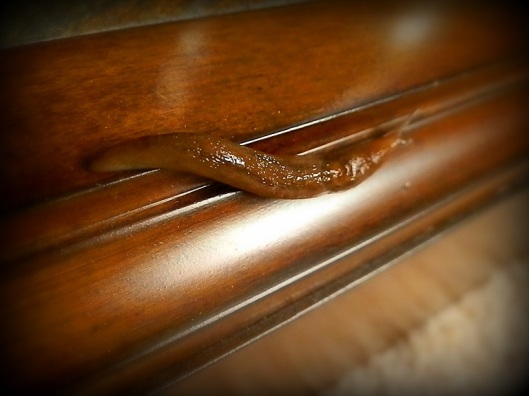 I stopped to take pictures, only because I was in no hurry to pick the thing back up, and then I scooped it onto a paper and took it outside in the back yard.  Hey, I don’t have anything planted out there it could destroy, so what the heck.

I know, the usual thing people in Hillbilly land do is dump salt on them and watch them die in agony, but I wasn’t up for that today.

I figure the nasty thing probably rode in there on Lucy and dropped off onto the carpet.  I have the best luck with that kind of thing (eye roll).

Hope you all are having a wonderful start to your Fall, and that your weather is gorgeous!  Take care and enjoy your bugs!

One day I was breezing through the dining room and noticed a particle of food on the table.  Messy Frank, I thought, and started to swipe the crumb into my hand to throw it away.  I stopped short when I noticed it wasn’t a crumb. 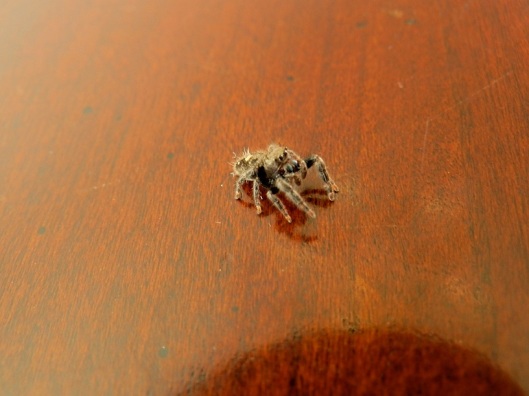 By the time I got a clear picture of the little critter (and showed off that I had neglected to dust off my table), she was no longer afraid of me and the rapport we had formed made me unable to kill her as I had planned to.  So, the evil-looking thing willingly climbed up on the napkin I offered and was escorted outside. Before Spring, while the temperatures were still cold, City Boy and I noticed that there was suddenly a mass number of ants joining us in our home.  This would not do.

We do love most living creatures, but we’re selective about which ones we share our house with.  So, City Boy went about the task of trying to do what he could to rid us of our indoor pest problem.  There was, after all, still snow on the ground, and we really couldn’t be effective with our efforts until the first warm day when Frank could treat the outside of the  house.

Once, that happened, the ants disappeared as mysteriously as they came (thank goodness).

Frank came in today from spraying the outside of the house and yard, and said he really hated it when he kept seeing lots of lady bugs where he was spraying.  He said he kept trying to avoid spraying where he saw them, but he would then find them eating the same grass that he had sprayed, so he was really hating that a lot of lady bugs were going to end up suffering the same fate as the ants.

If anybody knows an effective way of getting rid of ants without killing lady bugs, please let me know!  I’ve already read several natural ways of repelling ants, and most of those are designed for inside the house and only repel them rather than getting rid of them.

I’ve mentioned before that our resident robin moved out of her winter home, which was in the fake plant that hangs from our front porch.  Since she built a new home on the side of the house, Frank thought we could now take the empty  hanging basket down. 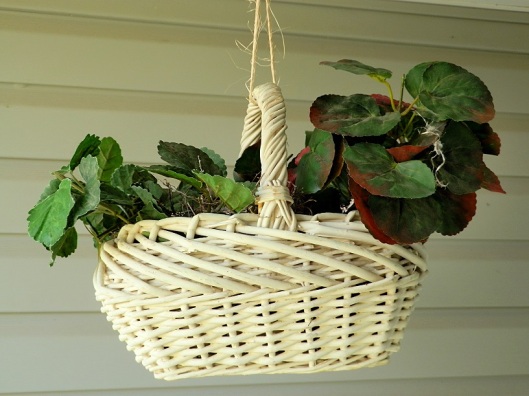 When Frank opened the front door, out of the basket flew a little bird.  Well, dang.  We decided it was warm enough that the new little bird could find herself somewhere else to make a nest.  We are trying to discourage sharing our house with every animal and bug in the area.

Well, lo and behold, too late.

One thing that isn’t trying to get in our house are all the rabbits running around our yard.  Why?  Well besides from being kind of shy, there’s this: 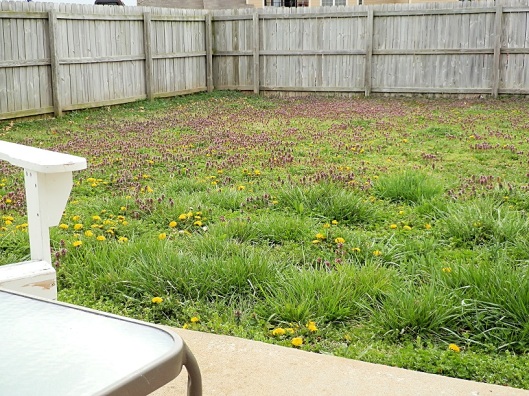 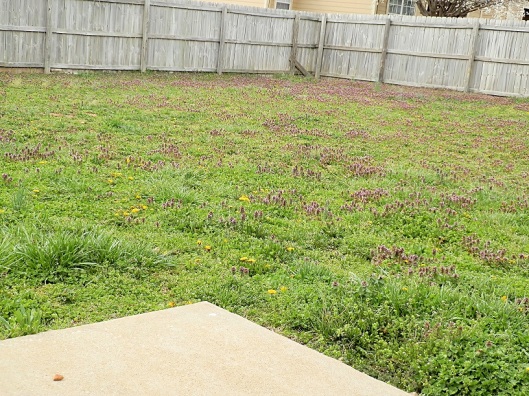 Right before the first mowing of Spring our back yard gets to be a regular smorgasbord for herbivore animals.  Right after this picture City Boy mowed it, and the rabbits came right back, undeterred by the shorter clover or the barking little dog chasing them.

Sometimes it’s tempting to just fling the door open and let the critters in, and then we can just sleep in peace outside.