As a storm approached, we battened down the hatches and tried to put our porch furniture where it wouldn’t blow around so much, and made sure the cover on the barbeque smoker was secure, all the usual stuff that is done when one is expecting wind and rain.  The skies slowly began to turn from very light blue to grey, to ominous gray.

Finally, after awhile of low thunder, the wind started lashing and the rain came pouring down in sheets, blowing all different directions.  We were thankful to all be in a warm house, since the temperature had also dropped.  We were going about our business in the house when I glanced out the front window, and to my dismay spotted something I had forgotten all about, high up in a tree.

Our little resident robin had perched up there, apparently trying to ride out the storm.  And ride she did.  The chilling wind was whipping the branches all around with her on them while she kept a death grip on the branch she was on.  As she was being thrashed around by the wind she was being pummeled by the cold rain.  It still didn’t look horribly bad and I really wasn’t too concerned until I got the camera out and zoomed in closer on some of the pictures I was taking. 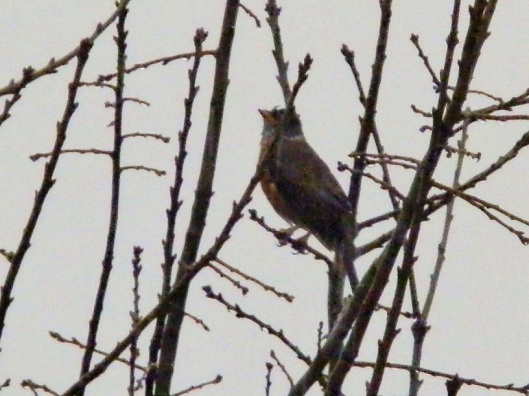 It is apparent in the closer up pictures that the wind is really blowing her and the rain is falling off of her in sheets. 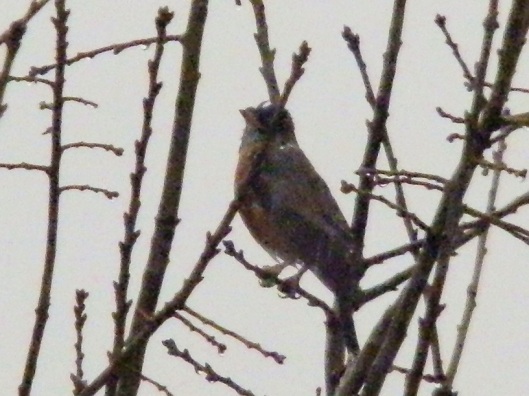 All that misty distortion on her in the picture is sheets of rain.  The robin began to try to shield herself after awhile: 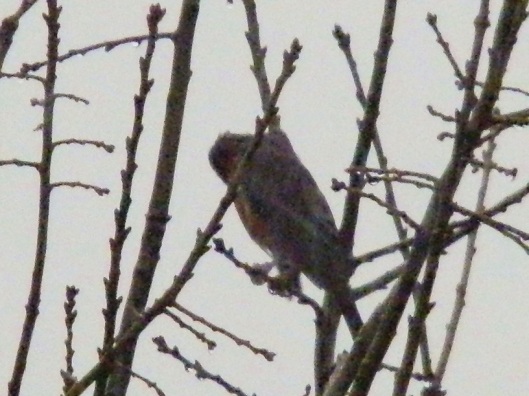 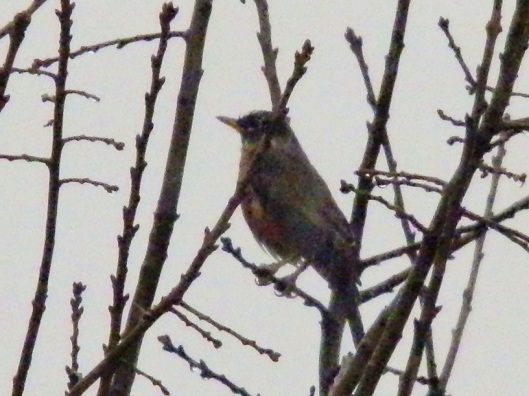 Birds have been weathering storms since they first appeared on the earth, but it was still really hard to watch this.  There wasn’t a thing we could do, and I was feeling pretty guilty at this point for having removed my basket of fake plants from the porch that she had been taking shelter in.  Well, at the time I hadn’t seen her in it in awhile and thought she’d left, and I wanted to put up Christmas decorations.  I didn’t mean to be mean!

Anyway, Robin rode things out until the wind died down for a brief few moments and she was able to fly over to a neighbor’s balcony and take shelter in some dead plants in a planter.  My guess for why she didn’t take up residence over there in the first place is that there are young children over there.  But I really don’t know what goes through a bird’s mind when they pick out a home.

So, the robin was back when the sun came out, and we then knew for sure that she had weathered things out.  I guess I should put my fake plant basket back up, maybe. 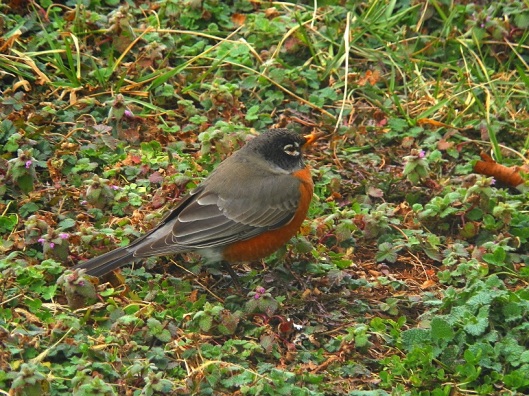 On a lighter note (or heavier note, however you want to look at it), I really like rich cake.  The usual box mix made according to package directions and frosted with a tub of ready-made frosting is good, but just doesn’t quite do it for me as far as the rich factor. This is one of those cakes, made from a box mix with a tub of icing on it.  There is a difference, though.  A whole bag of chocolate chips mixed in.  Amazing it doesn’t look like it, but they’re there, and taste wonderful.

Actually, they are not exactly mixed in — When I first started using flavored chips in cake I used to stir a whole package of them in with the batter before I put it in the cake pan.  It was good that way, but the chips all went to the bottom and some of them burnt and stuck to the pan. So, I tried different things, and finally found what works the best.  Mix batter according to package directions (or recipe, if making cake from scratch).  Put the cake batter in the prepared cake pan as usual, then sprinkle half the bag of chips (any flavor desired) over the top. Then bake the cake as usual.  When the cake is done and you first pull it out of the oven, sprinkle the other half of the bag of chips over the top of the cake.  I usually put the cake back in the still-warm oven I’ve just turned-off for about 30 seconds or so, just enough to make the chips soft enough and then spread them over the top of the cake.  Let the cake cool completely, then frost.  I don’t usually use the whole tub of frosting on this because it makes it almost sickening rich, and a lot of frosting is wasted when people scrape it off of the cake and leave it on the plate after they finish their piece of cake.

The above cake was a mix I had kept stored in the freezer since Halloween and a tub of frosting I had gotten at the same time.  I used the whole tub of frosting, and shouldn’t have.  But this cake is so decadent and good when made with the baking chips.  It can also be made with cake and frosting that has been made from scratch.

My favorite combination of all time is chocolate fudge cake with milk chocolate chips and frosted with chocolate fudge frosting.  That cake is so decadent and rich you will think it’s sinful.

For Christmas, Santa was good to me.  Why I’m mentioning that now, when it’s February, is because I wanted to talk about a few favorites of mine (the song from The Sound Of Music called “My Favorite Things” comes to mind).  I love to smell good.  Well, most people don’t want to smell bad, but I mean I like to smell extra good on occasion, and so I have a few favorite smelly things I enjoy using.

City Boy gifted me my all-time favorite cologne for Christmas.  We’re not rich, so he had to save up for this, and then this particular cologne had a deal going the same week he went in to buy me a bottle of it.  So I got all THIS!

Actually, the reed diffuser did not come with it, but the rest of it came with the promotion Estee Lauder was running at the time.  Also included was a little purse sample of another cologne, Precious, that they were promoting with it.  Anyway, this cologne smells really good, and is much better on than in the air.  So if you are looking for a different scent and haven’t tried this one yet, stop off at the Lauder counter and try some out!

If you’re one of those people (like me) who usually doesn’t want to spend that kind of money (I do have to admit that I would never buy Beautiful for myself because of it being so pricey), I have another favorite that I have used for years.  My mom got me some for Christmas and I use it a LOT. 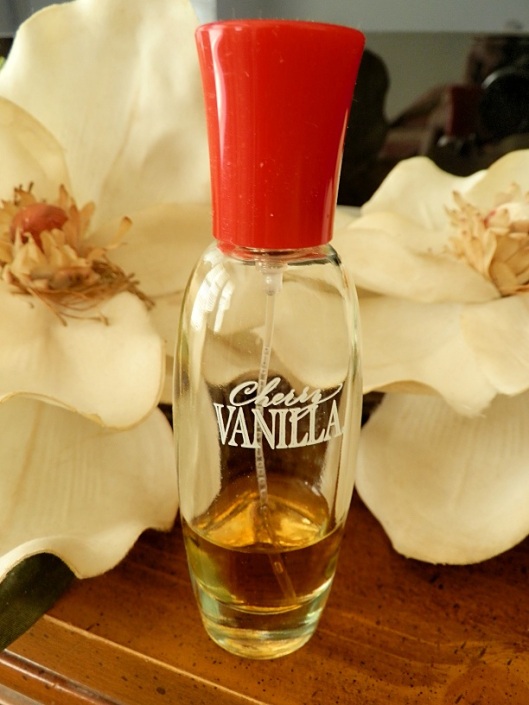 It’s probably easy to tell by how dusty and dinged-up this bottle of Cherry Vanilla is from sitting out and being thrown around and dropped and by how empty it already is after less than two months, that I use this cologne quite a bit.  It’s a rich smelling, wonderful blend of two wonderful scents.  When I was a struggling single mother I used to buy this at Walmart and got a lot of compliments on it.

Mom told me one time that when she was young and single a lot of women wore cooking vanilla as cologne, and so mixing vanilla and other scents just seems natural.  I don’t remember how much this cologne is, but I am very sure it is still much more affordable than cologne from the perfume counter at the department stores.  The only problem with Walmart is that, many times, they don’t have samplers out so you can try this.  But it does smell like cherries and vanilla, so if you like those two things, you will probably like this.  It’s possible they also sell this in drug stores, so if you see some there, drug stores are usually better about keeping sample bottles out.

When City Boy and I first moved back here to Missouri from Texas a year ago, we bought a new quilt from Bed Bath and Beyond on a fantastic sale.  We’ve been doing so many other things since then that we’ve neglected really fixing up our bedroom much.  I don’t want to be matchy-matchy or anything, but I would like whatever decorating we (meaning I) do to coordinate with this quilt.  It actually turned out to be bigger than we expected, so we’re using it as a comforter.  If I can’t figure out what I want to do, I can just go back to the old comforter set we had, but I’d rather not. 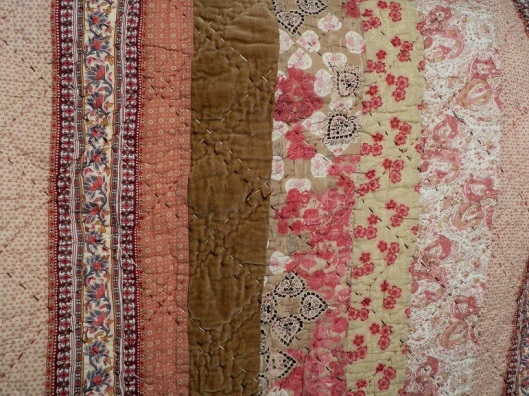 So, really, don’t laugh — it really doesn’t look Granny-ish.  For now I’m just trying to decide what to do in the bedroom that will coordinate.  If I in all my decorating wisdom (cough) can’t figure something out, I’ll beseach all of you for helpful advice (I would show more of the problem areas of the room then), because you guys always have such good ideas for things and I don’t (whining sound).  You know by now that if I can’t do it on-the-cheap I will neglect doing it (be lazy) until I just have no other choice (no other easy way out).

Okay, so I’ve meandered around quite a bit in this post, and in posts lately — I really need to start getting more organized and posting with a general theme, even if it’s only about leg hair or something (not that I would post about that).  It would make it much easier for people to read, for sure.  So that’s my goal for the near future; to post in a more organized fashion.

This week’s reminder, for those of you who celebrate Valentine’s Day, or will be made to wish you had by your significant other (lol):

Monday, Tuesday and Wednesday are your very last days to shop/plan/possibly ship, so make your special someone jump for joy and get ‘er done!