When City Boy and I first moved here, I was immediately adopted by Kaylee, the little girl across the street.  She and I do things together like walking the dog, tramping through the woods, playing computer games, eating, etc.

She was very proud of her big icicle find the last time we were out in the weather.

Back in June it was a different picture outdoors. 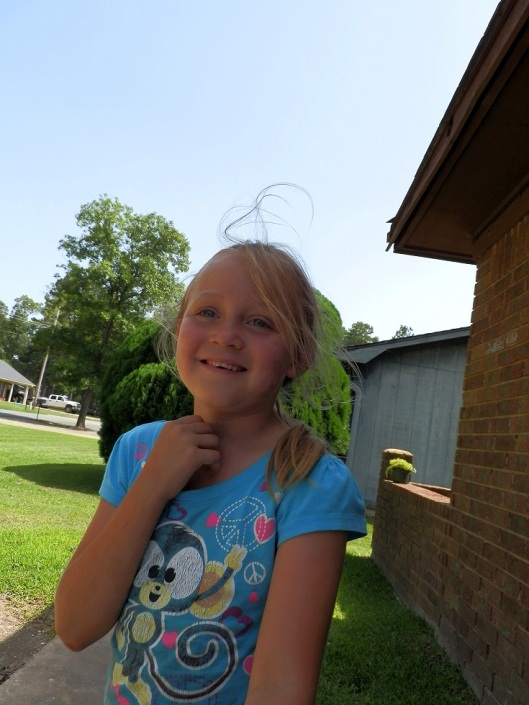 It was already hotter than blue blazes (whatever that means) when we moved in to our humble temporary home, and Kaylee was right there to help.

But, that was then and this is now, and the two are a sharp contrast.

The city park, where kids like Kaylee usually like to hang out and play, is cold, gloomy and quiet.  Only whispering ghosts of children’s laughter might break the silence. 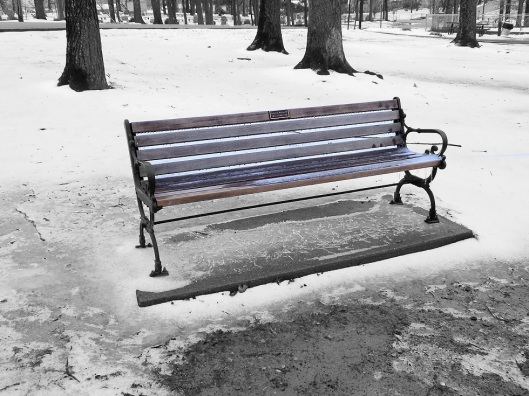 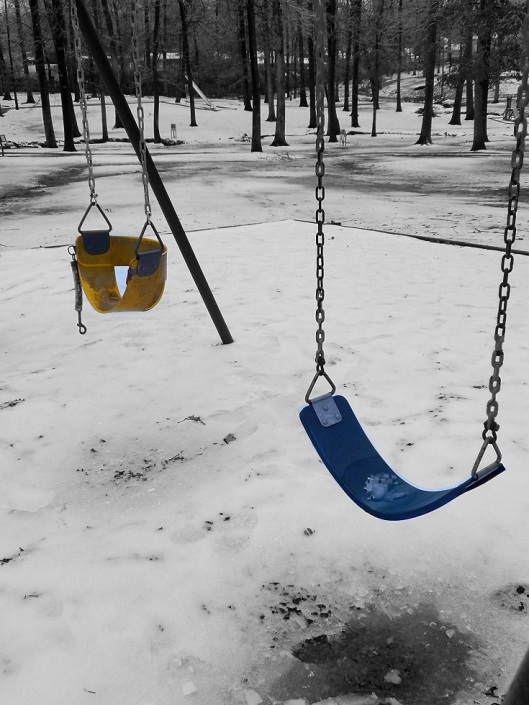 Wouldn’t it have been a fun surprise to have seen snowmen in the park?!

Even on the gloomiest days there is usually something a person can do to brighten it up, even if it’s only to smile.

Just an update on my son’s father, who I mentioned in my previous post: He actually made it through the surgery.  Even though there were some unexpected complications during the surgery, he somehow managed to pull through.  He’s not out of the woods yet, and still isn’t very coherent most of the time, but we are told it has more to do with all the medication they are giving him.  Hope and God’s grace is there for those who reach out and grab it, for sure.

For now, darkness covers the ice, and bedtime fast approaches.  Greetings to you — be careful, stay safe and warm, and be blessed!

Just because those of us in Hillbilly-land are waiting with such anticipation to take pictures of the glorious Fall colors, the golden hues of Autumn have decided to be late this year.  All around us in this area everything is still green, with just a hint of Fall color here and there. 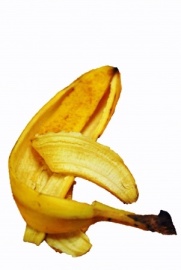 After a little mishap I have been spending the last month or so getting back to normal.  Most of the physical damage was on my left side, but I have been careful and healed nicely.  There are only the residual problems that come with broken ribs, which take forever to heal, and I still can’t grip things with my left hand.  Handwriting anything is out, but I can finally type with both hands, so I’m mostly back in business.  Yay!

We have been getting lots and lots of rain here, with just the occasional sunny day.  What that adds up to is that the grass is still growing rampant, while mowing has to be a rush-job between rains during the short times the sun is out.

But, it’s nice to still have a green lawn, although City Boy would beg to differ with me — he is the one having to mow it. 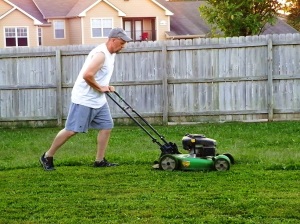 Believe me, I have offered to mow it many, many times, but he has never quite trusted that I can do it correctly.  Now that I actually have not been capable of doing it at all for the last month, it has truly become his and only his chore.

He has been wondering how I can stumble around holding a camera and taking pictures, when things like cooking dinner or doing dishes has been a hardship for me.  Amazing how that works, don’t you think?

Well, for one thing, the shutter button is on the right side of my camera, and it’s the left hand I have the problem with.  And cooking and doing dishes involves getting food and water on a person’s hands, which I have not been able to do with my left hand, so that’s the way it goes.  Now that I can at least do these things again, City Boy is really looking forward to me cooking chili tonight and making banana bread for him.  It’s the least I can do for his first day of handing the reigns (mostly) back over to me. 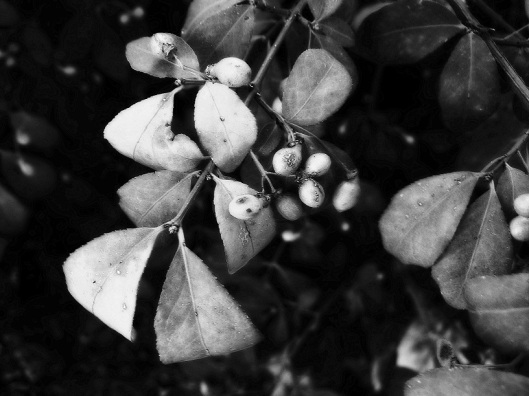 Actually, City Boy has been a good boy and I have really appreciated his help and understanding while all this has been going on.  I married a wonderful guy, and not because I’m a good guy-picker, but because I got lucky that he came along when I was doing the picking.  Amazing how that works, don’t you think?

And, actually, he picked me, but we’ll just keep that between us, winky-wink.

So, Fall has come in around here with a whimper.  But, the weather people say that the colors are just a few weeks later than usual because of the unusually warm Fall we’ve had so far.  Well, that makes sense I guess.

Until some photo-worthy color comes in, I’ll post pictures I took just before the monsoon started.  After all, even with all of my limitations of late, I never became unable to manage taking pictures.  Amazing how that works, don’t you think?